A B C D E F G
In music notation, pitches are assigned one of 7 letter names: A, B, C, D, E, F, or G. These letters are known as the MUSICAL ALPHABET. For example, when looking at the staff with a treble clef, the lines and spaces are each given a letter name. These letters are always found in the same spot for this staff, regardless of what instrument you are playing.

​The bass clef and staff also have assigned letter names.

​Take a look at the grand staff below. You'll notice that the bass clef and treble clef meet in the middle at letter C, also known as middle C.

​It is a combination of the musical alphabet and accidentals that create the KEY SIGNATURE of a piece of music. The key signature is a series of sharps or flats written at the beginning of a piece of music. It is important because it describes what notes are in the piece, which note is the tonic (or sort of "home base note"), and what sharps and flats (accidentals) to play. Different key signatures also have different qualities and character/mood, so selecting a different key signature for your piece can change the sound and character of the music drastically.

In written music (NOTATION), the key signature is located in between the clef sign and the time signature. 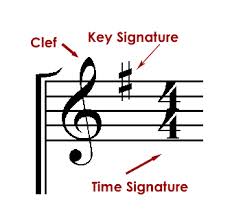 When reading music, it is important you understand how to read and use the key signature. In the example above, we see one sharp sign (#) that crosses over the top line of the treble clef. We learned earlier that notes on the top line of the treble clef take the letter name F. That means that in this piece of music, all notes written as F (all OCTAVES of F, in fact) are actually F sharps.
​